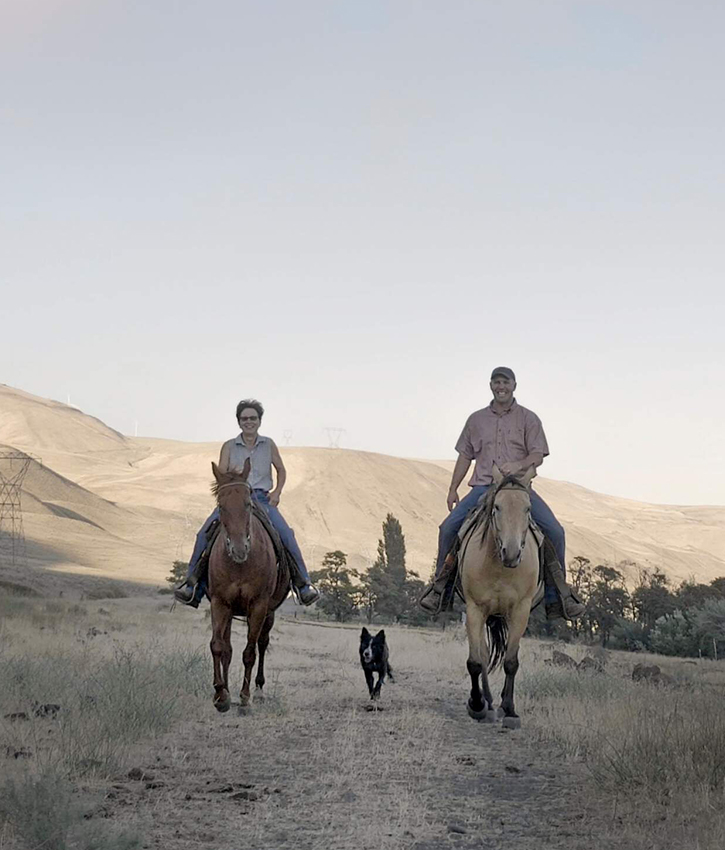 Klickitat County rancher Jane Lee is a force of nature. Whether it's helping a mother cow have a calf or saving a hiker off the side of a mountain, she's up to the task. Her super power is helping others, and this influential woman is passing it down to the next generations at Lee Ranch.

The Lee Ranch: A #wabeeflove Story

"Robert was my most frequent visitor at the fruit stand those summers I worked. Who knows how many cherries he had to eat, but he got my attention and here I am still today!" -Jane Lee, eternal romantic

On paper, Jane Lee was an unlikely rancher. But in all the ways that count, she’s a born natural, so it’s fortunate that fate sent her down this path. Jane grew up in Pennsylvania and California. The year she graduated high school in Southern California, she came up to Washington to work at a friend’s orchard and fruit stand at Maryhill. Those summers, a young cattle rancher named Bob Lee stopped in to get some fresh cherries and apples, repetitively, and the rest is history.

“The bellyache. It was worth it,” according to Bob, who’s been married to Jane for 50 years now.

The Medical Assistant degree Jane earned from Los Angeles City College before they were married could have given a clue into her caretaker nature. The cycle of life on the ranch and realities of living rural give her ample opportunities to take care of people and animals. She wouldn't have it any other way.

The Lee Ranch herd are a crossbreed of Simmental and Angus cattle that do well in the arid climate and rocky rangeland they graze. Each year, the cows have their calves in February and March near the Lees’ homes and barns where they can be monitored and cows or calves can be assisted if there are complications. The cows and calves go out to summer pasture together where they graze, and are brought back home in October to be weaned. The mother cows will have calves again in the spring, and the calves then finish growing at the ranch on a diet of locally grown hay, corn, and barley. When these cattle reach market weight, they are primarily sold to the Agri Beef packing plant in Toppenish, WA just over an hour away from the ranch. At the plant, the cattle are slaughtered and based on the quality grade they achieve will be cut into steaks and sent to restaurants and grocery stores under the Double R Ranch and St. Helen's beef brands.

Son, Dan, and his wife Mary, Goldendale school counselor, have also cultivated growth in the ranch’s Columbia River Beef custom beef offering. They’ve seen demand build as customers share their satisfaction with the product and the enjoyment of buying a quarter, half, or whole beef directly from the ranch. The “know where your food comes from” trend drives interest higher each year. The beef is pre-ordered and available in the spring when all of the cattle are ready to ship. Offering beef directly to customers compliments their existing model, and gives beef lovers a chance to connect with them and where it was raised.

When the merits of raising beef and including it in our diet is questioned, the history and ecology of ranches like the Lee's is often left out of the story. The steep scab-rock and timbered summer pastures the Lees graze are perfect for raising cattle and are unfit to raise other human-edible food. If cattle and growing winter feed for them was displaced by fruit orchards or vegetable rows, it would require a great deal more water. And this family business would not be able to provide direct market beef to interested customers or support the larger demand for beef through their marketing to Agri Beef.

Handing Over the reigns

Today at the Lee Ranch, Jane and Bob work for their son Dan who has taken over. Everyone pretty much does what they’ve always done, but now the day-to-day decision making is in the hands of the next generation. So, Jane considers herself retired. And by retired she means still serving as a sixth term elected Fire Commissioner, leader of the Klickitat County Search & Rescue training program, and ranch hand. While this retirement reads a bit less restful than the average American’s, like any retiree aspires, she’s doing all the things she loves. Jane loves serving her community, getting the rush of helping people in their hour of need, and trailing through the pastures on horseback beside her grandsons Nick and Myles.

Jane's grandsons Nick and Myles are the fourth generation of Lees to raise cattle in the ruggedly beautiful Columbia River Gorge, and the second generation to be heavily influenced by a woman who, in the dodgeball game of life, you want on your squad. Even with new generations coming up, the work is never done, and she’s quietly okay with that. Recently, she participated in a mutual aid call to rescue a mushroom picker named Colleen in Skamania county. Jane and a team of volunteers were there to find her and make sure she didn’t have to spend a second night alone in the wilderness. Whether it's search and rescue or wild land fire fighting, southeast Washington communities are fortunate to know the Jane Lees of the world are there to help.

"Jane really is amazing. She's as good and hard a worker as the guys. She looks for things that need done and just does them. She's tough, too. She'll keep going if she's sick, tired or even with broken bones! I'm not sure what we'd do without her!" -Mary Lee, Jane's daughter-in-law

It Comes down to families

Not every ranch has a Jane Lee, because not everyone can be a pie-baking, life-saving, rockstar grandma. But there are more of them than you think. About 97% of U.S. farms and ranches are family owned. There are over 9,000 cattle farms and ranches in Washington. They’ve all got one love story or another, and a story we love to share.

Cows are bred and calves are born and raised every year on cow-calf farms and ranches, spending time grazing on grass pastures within sight of their mothers.

Cattle ranchers have many tools to keep the animals in their care healthy and safe, including nutrition programs, veterinary care and good management practices that are science-based, regulated and, above all, good for the animal and the consumer.

Beef In a Healthy Sustainable Diet

Learn how beef promotes health and helps prevent nutrient deficiencies, and the ways in which cattle play a unique role in our food system by upcycling inedible plants to high-quality protein.